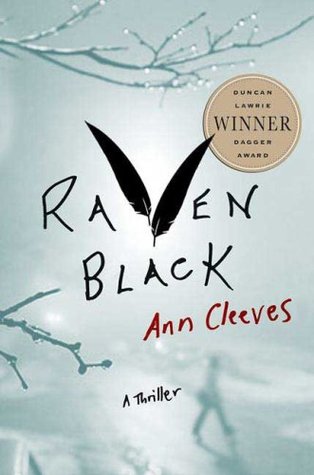 Raven Black by Ann Cleeves is the first in the Shetland Island series and is what the Shetland TV series is based on, although I haven’t watch it yet.  It also won the Duncan Lawrie Dagger award for best crime novel of the year in 2006.  I listened to this book on audio and my review is based on my listening experience.

“Raven Black”Raven Black begins on New Years Eve where two teenage girls decide to visit Magnus Tait on their way home from a party.  Magnus is a lonely man, who sits by the window watching for visitors who never come.  Later, when the body of one of the girls is discovered, suspicion immediately falls to Magnus, who was a suspect in the disappearance of another, younger girl several years back.  When Inspector Jimmy Perez begins his investigation there is no doubt that everyone wants him to arrest Magnus and lock him up; however, some of the findings don’t quite add up to Inspector Perez and he wants to make sure that no snap judgments are made as to guilt and decides to fully investigate no matter where it leads.

Looking back at my audio listening experience, what I remember most about my initial impressions was the dark and lonesome atmosphere I felt while listening.  There was action and dialogue, but still every conversation or scene description hinted of the characters never feeling like they were living up to their potential, or overall dissatisfaction with their lives in some way.  As if the mistakes made always lingered like ghosts and were never gotten over or moved on from.

As a listener of the book, one of the things I found challenging at the beginning was how the first several chapters seemed to be told from different perspectives.  With each new section, I had to quickly listen to clues as I tried to decipher where I was or who I was with since I couldn’t see it in print and going back a few pages isn’t quite as easy in an audio book.   However, once I started figuring out the plot and characters listening to each new chapter no longer bothered me and I was able to follow along quite nicely.  The characters were  interesting, but never fully explored since giving too much away on a character would be too revealing in this style book.  If there is a fault in the book, it would be this.  You get to know the characters, but only to a point so that you don’t necessarily feel invested in them.

Regarding the mystery/thriller part – I had a list of suspects, which I would cross off and then put back on several times throughout.  I can’t say I ever had it completely solved before the big reveal at the end, which is always nice in this genre of book.

All in all, I enjoyed this atmospheric mystery thriller and can recommend it.  The narrator, Gordon Griffin, conveyed both old and young, men and women quite well, which isn’t an easy feat.  He did a nice job throughout and I recommend him as an narrator.  The audio book is a little over 11 hrs long.