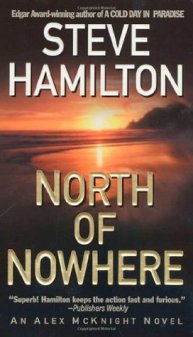 In North of Nowhere, Alex McKnight has turned into a bit of a recluse. He’s been spending a lot of time by himself and it has been noticed by his friend Jackie, who runs the local Glasglow Inn. Instead of letting Alex continue down this path he gives him an ultimatum: Get on a plane to go live in the Yukon territory where Alex would then get the chance to go whole years without seeing anyone – or attend a local poker game and be social. Alex eventually gets the point of what Jackie is trying to say and agrees to go to the poker game.

The poker game that night is played at the house of a man named Vargas. Vargas is a self absorbed show-boater – he loves to display his collection of artifacts that he has in his house, to show his wealth off, and to talk about his future real estate plans he has for Michigan. He loves to talk and then boast some more. He also has an annoying little dog. The others at the game are just putting up with it and doing a good job of ignoring it – that is until three armed robbers come in unexpectedly. They hold five of the poker players hostage while they take Vargas and have him empty out his safe. Thus ends the quiet night of poker – with guns, police, and sheer exhaustion. What comes next in the story are mistaken arrests, false accusations, fights, backstabbing, and more.

This is the first Alex McKnight book I have read – or listened to in this case. I needed a new audio book from the library and selected this one at random. One of the things I appreciated from this book was seeing another part of the world I am not familiar with. With Lake Superior within reach of Paradise, Michigan it almost becomes one of the supporting characters – as it gets used more than once during the story.

Audio Book Review:
As an audio book, this one was nicely done and it went really fast at 7hrs. It was narrated by Nick Sullivan and was almost over before I knew it. There were distinct American and Canadian voices, but what impressed me the most was how he made the main character and the other men all sound like people you might naturally know in real life. I do think the women voices weren’t quite as good and would be the weak spot in the audio, but overall well done.

After reading the book, I was a bit surprised on how much I wanted to talk to someone about two of the characters within the story. I felt the need to unload my thoughts and wished more than once that this had been a book club book so that I could. I’m not sure if this is due to the book and the writing, or the narration and the personalities he gave them – probably both. But I’ve always thought that if a character and whatever they did or whatever happened to them make you want to continue discussing it after the book is finished, then you’ve probably read a pretty decent book with good plot and character building. However, as I mentioned previously it was a random find at the library so I am out of luck there. Plus, this is a mystery book, which hinders how much I can say in this review.

One thought on “North of Nowhere”